Dr. Anurag Pande is a transportation engineering professor at Cal Poly and uses statistical analysis in his teaching and research regularly. If you would be interested in helping him with research/instruction using your R skills please reach out to him by email:

apande@calpoly.edu at your earliest convenience.

The work is paid in the range of $15-$18 per hour and there would be 5 to 10 hours of work every week. It will be data analysis/processing tasks and possibly teaching some engineering students to do it as well.

When responding to Dr. Pande, please let him know of your weekly availability for the following week.

There's an international competition in mathematical modeling held every year over 4 days in January or February called the Mathematical Contest in Modeling (or MCM) This contest is open to any undergraduate student enrolled at Cal Poly (full or part-time) and is appropriate for students at any level: first-year students to those about to graduate. It is open to any major as well - it can be a competitive advantage in the MCM to have an interdisciplinary team.

The MCM is an international competition, held over 4 days, where teams of three undergraduates construct mathematical models to investigate and present solutions for real world problems. Teams choose one of three problems posted online at the start of the contest and submit a detail report of their model and solution within 4 days: problems appear Thursday, 5pm and reports are due online before Monday, 5pm. Generally one of the problems is designed for modeling using continuous mathematics, one for modeling with discrete mathematics, and one typically involves the analysis of a given data set. Topics are often drawn from real world issues, but some are more whimsical. Some recent problems:

Design a drone-based disaster relief program fro Puerto Rico after a hurricane.
Modeling the merging of traffic on a multi-lane highway after a toll booth.
Build a mathematical model to assist in a search for a lost plane that crashed in the open ocean.
Model the behavior of the dragons from the Game of Thrones fictional world including their impact on the local eco-systems.

The Mathematics Department provides space and support for the competing teams during the contest. More information and the problems from the contest of many previous years can be found on the web site: http://www.comap.com/undergraduate/contests/mcm/

All poster submissions will be double-blind reviewed by the Program Committee on the basis of technical quality, relevance to the conference’s topics of interest, originality, significance, and clarity. Author names and affiliations must not appear in the submissions, and bibliographic references must be adjusted to preserve author anonymity. Submissions failing to comply with paper formatting and authors anonymity will be rejected without reviews.

Because of the double-blind review process, non-anonymous papers that have been issued as technical reports or similar cannot be considered for DSAA’2020. An exception to this rule applies to arXiv papers that were published in arXiv at least a month prior to the DSAA’2020 submission deadline. Authors can submit these arXiv papers to DSAA provided that the submitted paper’s title and abstract are different from the ones appearing in arXiv. Papers that appear in arXiv from the DSAA’2020 submission deadline until the review process has ended, are not allowed.


The Mustang Media Group, specifically Mustang News, is looking for someone who is eager to have hands-on experience gathering, interpreting, and visualizing data. This is a paid position. Last year, we had a graduating statistics senior who worked primarily with our news data team The Hill. This year's responsibilities included:
The previous person in this position also mentioned developing scripts to scrape data online using R, so some familiarity with that program would be appreciated (but is not required).

If a student is interested, they can apply at https://apply.mustangmediagroup.com/editorial/data-reporter/
Posted by Cal Poly Statistics Department at 4:43 PM 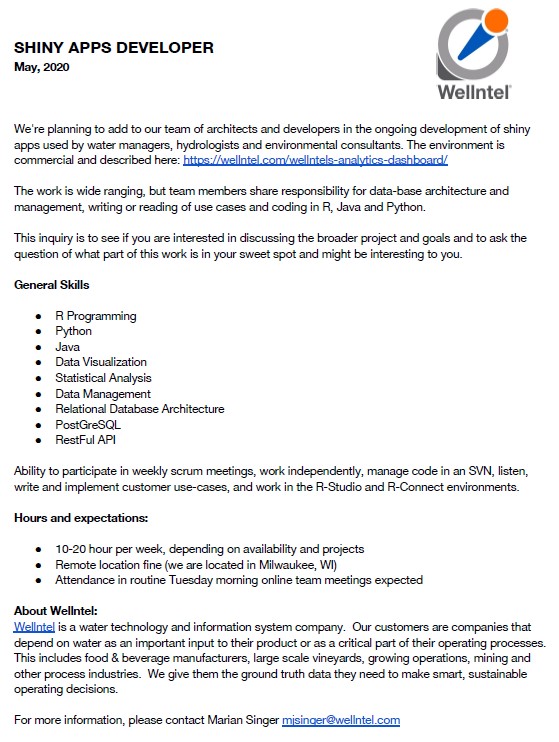 Posted by Cal Poly Statistics Department at 11:10 AM


The Graduate Opportunities for Women (GROW) 2020 conference for undergraduate students is being held October 23-25 in Chicago. GROW 2020 is aimed at female-identified undergraduate students who may be interested in pursuing a graduate degree in the mathematical sciences and is open to undergraduates from around the U.S. The conference will be hosted at the University of Chicago this coming fall. Further details are available on the conference webpage, and there is an application form for students who are interested in attending.
Posted by Cal Poly Statistics Department at 10:15 AM

The Department of Computer Science and the Department of Mathematics and Statistics have combined their existing talents and resources to offer a MS in Data Science. This degree is designed for students with an undergraduate degree in the sciences or engineering, and it provides both mathematical and algorithmic foundational knowledge and practical programming skills for data science careers. Upon completion of this program, students will be able to:

This degree assists those with a baccalaureate degree in the sciences or engineering to pursue a data science career by providing them with a rigorous and affordable education in mathematics, statistics, computer science and machine learning. Graduates will appeal to a number of data-based careers including but not limited to data scientist, data analyst, data mining specialist, machine learning engineer, and data and analytics manager.

TA positions are available to qualified applicants. TA's get a partial or full in-state tuition waiver and a salary, both of which depend on the teaching assignment. Applications are still be accepted to theMA Math, MS (Applied) Math and MS Statistics programs as well. The application deadline is June 1.


Posted by Cal Poly Statistics Department at 10:11 AM